Good news Detroit: We’re #1 again! In a head-to-head contest with real contenders like Chicago, New York, Cleveland (At Least We’re Not Detroit!) and Atlanta, Detroit once again grabbed victory through the misery of defeat. Numero uno on Forbes Most Miserable City in America.  Heady stuff for a city on the verge of insolvency and far beyond societal breakdown. Much should be made of the fact that Detroit, along with the other top-10 miserable winners, is reaping the fruits of decades of liberal husbandry. Unfortunately all that carefully cultivated fruit has been left to ferment on the ground.

Oddly, few people in the media seen interested in discussing this ‘as ye sow so shall ye reap’ phenomenon. Even though the evidence in Detroit’s case is quite staggering, as I’ve recounted before (here, here and here). 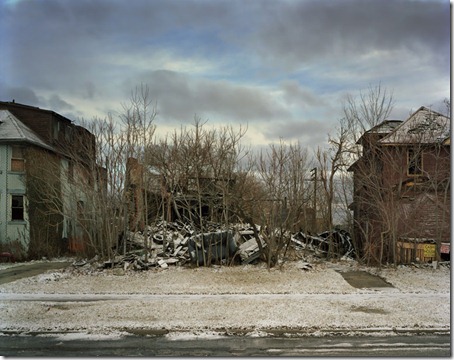 Democrats care about the environment

Take Charlie LeDuff  for example, who has just published a book called Detroit: an American Autopsy.   When asked about the connection between liberal Democratic policies and Detroit’s collapse on Fox last week, he deftly glossed over it by responding that Detroit’s last Republican mayor also went to jail for corruption.

Interesting, but just for the record, Detroit’s last Republican mayor left office in 1962, pre-Great Society. And he was convicted 7 years after leaving office not for “corruption” but rather tax evasion - a felony that barely raises an eyebrow in Congressional races anymore. Still, better to smear the Republicans of the distant past than acknowledge the shenanigans of more recent Democratic scoundrels.

Ex-mayor Kwame Kilpatrick and his father, on trial.

Charlie is a street wise and at times entertaining local news reporter with impeccable journalistic creds. Still, he’s not ready for prime time, unless you’re looking for another talking head capable of spinning an artful dodge of  the inconvenient truths that plague liberal politics.

And not to disparage Charlie’s intellect – which I’m sure is awesome because he has degrees from two very prestigious universities - but anyone stupid enough to be “urinating in the dark” in Detroit isn’t exactly the sharpest utensil in the drawer.  Unfortunately, in a knife fight with Steve Doocy even a spoon wins.

So here’s Charlie’s conclusion: While Detroit probably was done in by corrupt politicians, it doesn’t matter whether or not they were Democrats or Republicans (again, for the record, they were Democrats, exclusively, from 1962 on) because everyone in the country is corrupt: “This is a national sickness. We’re just corrupt cheaters. That’s what we do now.”

It looks like the stay-at-home “independent” non-voters have found their spokesman in Charlie - it doesn’t matter who you vote for – you’re gonna get screwed, man!

Because of his excellent education (which may or may not have been made possible in part due to his Ojibway heritage)  I’m sure Charlie is aware of the fact that one of the founding principles of this great country is that it was to be a nation of laws, not men. I wonder what he thinks that means, though, and if he even finds it to be relevant anymore? Because to glibly disregard the bad ideas and political corruption that brought Detroit to its knees strikes me as a very cynical view of not just human nature but the entire concept of “a nation of laws.” It seems as if he might be acknowledging, if not actually condoning, the ruling class’ ability to play by their own rules.

If the governing elite - “our betters” - are not required, or even expected, to obey the laws implemented to guard against the very type of personal corruption that has ruled Detroit for decades, how can we expect them to uphold other rules of law? What’s to prevent them from circumventing or disregarding legal restrictions on their inherent power? Or the Constitution?

Shrugging your shoulders at corruption seems a slippery slope. But what if resistance is futile? What if we all adopt Charlie’s attitude of concerned resignation? What if we accept the premise that all politicians are bad, and there is clearly nothing to be done about it so you might as well just go about your business?

Choosing the path of least resistance has led Detroit to insolvency. The State of Michigan is about to appoint an Emergency Financial Manager to take over the City’s financial affairs. Imagine what would become of America if the rest of the country adopted the attitude of the citizens in America’s most miserable city.

Imagine what would happen if everyone just looked the other way when leaders make a mockery of their fiduciary responsibilities to the citizenry; 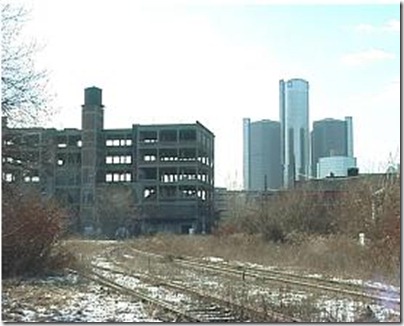 if they continued to allow the ruling class to violate the laws they swore to uphold, or reinterpret them to their own purpose. 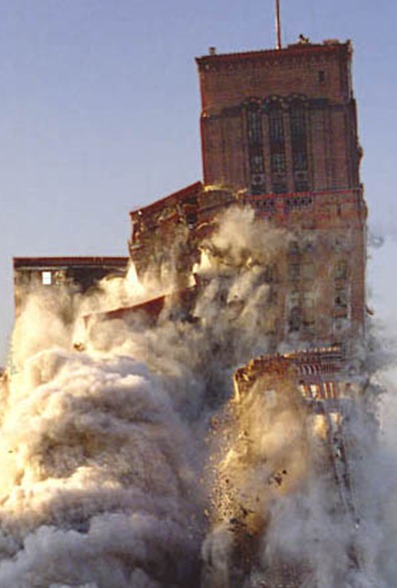 Thankfully, you don’t even have to imagine. All you have to do is look at Detroit. 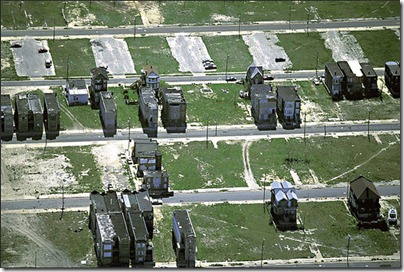 Detroit: We had to destroy it in order to save it. 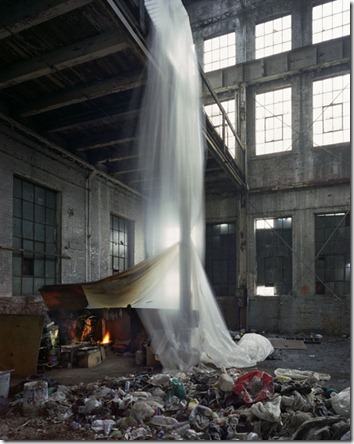 Detroit: the urban frontier of homesteading; and recycling

Keep ignoring the basic laws of economics at your own peril. 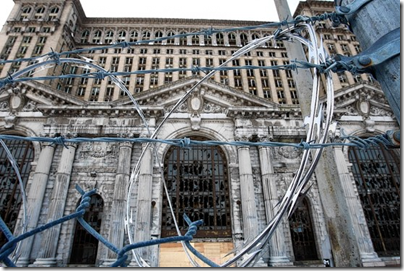 Keep out: no business welcome here

Keep flouting the rule of law. 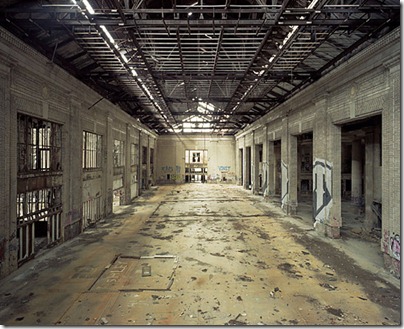 The halls of justice are empty 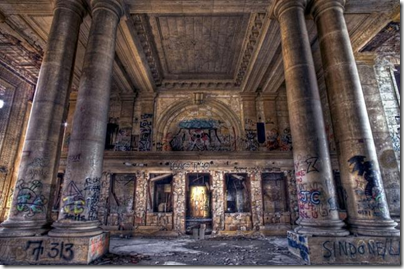 To the untrained eye, it just looks like decay. 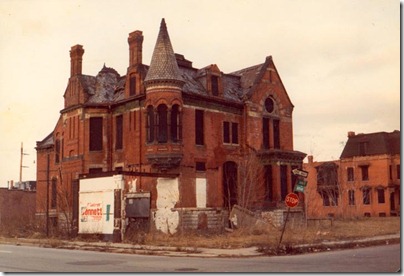 But you probably don’t think it could happen “here” do you?

Neither did the citizens of Detroit, 50 years ago. 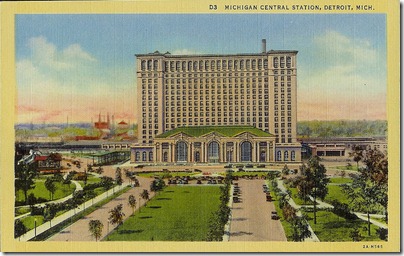 Michigan Central Station, located in the heart of Detroit, then and now: 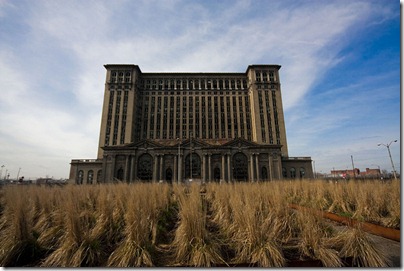 Most of us can’t do great things, but all of us can do something. Do something. If you don’t, you, or your children, will wake up one day on the other side, staring into the abyss that was once a great civilization. 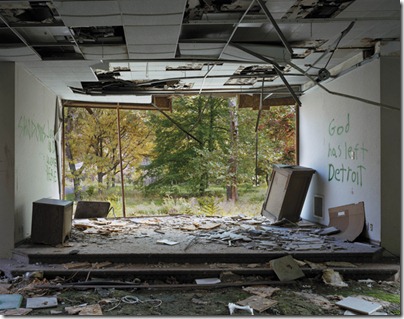 In Detroit, God has left the building.

This is Dewey, from Detroit; reminding you that we are the ones we’ve been waiting for. 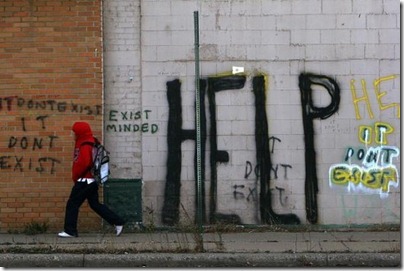 Linked By: Legal Insurrection and Legal Insurrection, and  Maggie’s Farm, and American Digest, and  Cardigan @ iOwnTheWorld, and daily timewaster, and BlogsLucianneLoves, and NOBO2012 on Free Republic, Thanks!

Posted by DEWEY FROM DETROIT at 2:37 PM