Enfant Terrible, or Why are American Parents Inferior? 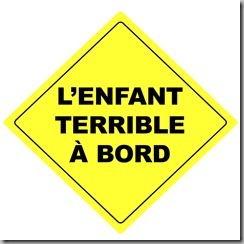 When it comes to parenting, I find myself siding with the French. Quelle surprise!

Allow me to turn your attention to an article in last Saturday's Wall Street Journal: "Why French Parents are Superior." It's a catchy title, but a more accurate one would be "Why American Parents are Inferior," because it appears that the French are simply doing what one might expect of anyone in the role.

We join author Pamela Druckerman after a harrowing vacation weekend in a French coastal city with her husband and toddler, where we immediately get a hint at the nature of the problem.

[W]ithin a few minutes she was spilling salt shakers and tearing apart sugar packets. Then she demanded to be sprung from her high chair so she could dash around the restaurant and bolt dangerously toward the docks.

When ineffectual parents cave in to a toddler's unreasonable and dangerous "demands," you've already lost the war, ma chouette. Let the record reflect, however, that the parental units did the best they could:

Our strategy was to finish the meal quickly. We ordered while being seated, then begged the server to rush out some bread and bring us our appetizers and main courses at the same time. While my husband took a few bites of fish, I made sure that Bean didn't get kicked by a waiter or lost at sea. Then we switched. We left enormous, apologetic tips to compensate for the arc of torn napkins and calamari around our table.

Unfortunately, no compensation was left for the other patrons of the brasserie, who were no doubt as entertained as the staff were by these hapless parents' offspring's performance art.

Then, a glint of light in the darkness:

... I started noticing that the French families around us didn't look like they were sharing our mealtime agony. ... French toddlers were sitting contentedly in their high chairs, waiting for their food, or eating fish and even vegetables. There was no shrieking or whining. And there was no debris around their tables.

I myself have observed this apparently now-unusual family dinnertime dynamic with Japanese families in restaurants around Detroit.  I've also seen it in other flyover outposts -- Iowa, Nebraska, Utah. Think of it: whole families of bitter clingers acting civilized.

It gets better (or worse):

I realized it wasn't just mealtime that was different. ... Why was it, for example, that in the hundreds of hours I'd clocked at French playgrounds, I'd never seen a child (except my own) throw a temper tantrum? Why didn't my French friends ever need to rush off the phone because their kids were demanding something? Why hadn't their living rooms been taken over by teepees and toy kitchens, the way ours had?

Let's try to noodle this out on our own, as it's a little early in the game to buy a clue.

When American families visited our home, the parents usually spent much of the visit refereeing their kids' spats, helping their toddlers do laps around the kitchen island, or getting down on the floor to build Lego villages. When French friends visited, by contrast, the grownups had coffee and the children played happily by themselves.

Nope; still no clue. Unable to crack this perplexing mystery, Druckerman dedicated five years of research to get to the bottom of this conundrum and write a book. Here's what she discovered:

Middle-class French parents ... have values that look familiar to me. They are zealous about talking to their kids, showing them nature and reading them lots of books. They take them to tennis lessons, painting classes and interactive science museums.

Yet the French have managed to be involved with their families without becoming obsessive.

Sooo...children are not the center of the entire universe? Both they and you might benefit from a more balanced approach?  Who knew? Apparently almost everybody:

This problem has been painstakingly diagnosed, critiqued and named: overparenting, hyperparenting, helicopter parenting, and my personal favorite, the kindergarchy. Nobody seems to like the relentless, unhappy pace of American parenting, least of all parents themselves.

They say recognizing the problem is the first step. Here's a bit of unsolicited advice that may advance the beleaguered author to step two: "If it hurts your head to hit it against the wall, maybe you should stop doing that."

Our intrepid parent soldiers on. Recognizing that French children seem to be better-behaved than her own brats, she conducts some investigative reporting and asks French parents how they discipline their children. It turns out that they don't "discipline" them, as the author understands the term, in the sense of imposing punishment.  Rather, they "educate" their children on how to behave. We "old ones" might call that "training," which implicitly involves some form of "discipline" if the "training" doesn't result in the desired behavior. But I understand that that conjures up uncomfortable comparisons to housebreaking a puppy. Developing a properly socialized human being is much more complicated, so "educate" it is.

Here are some of the French tricks of proper "education" that Druckerman uncovered:

One of the keys to this education is the simple act of learning how to wait. It is why the French babies I meet mostly sleep through the night from two or three months old. Their parents don't pick them up the second they start crying, allowing the babies to learn how to fall back asleep.

[Learning to wait] is also why French toddlers will sit happily at a restaurant. Rather than snacking all day like American children, they mostly have to wait until mealtime to eat. (French kids consistently have three meals a day and one snack around 4 p.m.)

Three meals and an after-school snack? What a concept! Maybe if more American parents adopted that pattern, Michelle Obama wouldn't have to be carping constantly about our kids' fat behinds.

It turns out that a proper French childhood "education" includes learning the fine discipline -- if I may use that word -- of delayed gratification. Additionally, French children are also "educated" in the equally fine art of amusing themselves sans constant parental interaction. Imagine that! Independence! That sounds very...well, American. Or at least it used to.

Ms. Druckerman discovered that researchers have determined that children who learn how to control their urges by delaying gratification also develop other helpful coping skills:

[T]he good delayers were better at concentrating and reasoning, and didn't "tend to go to pieces under stress[.]"

Could properly "educating" children to be patient, as it used to be known, actually have other beneficial effects? she wonders incredulously:

Could it be that teaching children how to delay gratification -- as middle-class French parents do -- actually makes them calmer and more resilient? Might this partly explain why middle-class American kids, who are in general more used to getting what they want right away, so often fall apart under stress?

Well, it's not as if Americans don't want their children to be patient:

But patience isn't a skill that we hone quite as assiduously as French parents do. We tend to view whether kids are good at waiting as a matter of temperament. In our view, parents either luck out and get a child who waits well or they don't.

Right.  Just like with those puppies. You either luck out and get a good one who knows he's supposed to pee only outdoors, or you get a bad one who needs a more thorough "education."

While American parents in general and our author in particular seem to struggle with getting their children to behave, the French have deftly identified for these poor people the (obvious) source of the problem: allowing the children to be in charge. The consequences of this unnatural order of things elude the French's American counterparts.

After a while, it struck me that most French descriptions of American kids include this phrase "n'importe quoi," meaning "whatever" or "anything they like." It suggests that the American kids don't have firm boundaries, that their parents lack authority, and that anything goes. It's the antithesis of the French ideal of the cadre, or frame, that French parents often talk about. Cadre means that kids have very firm limits about certain things -- that's the frame -- and that the parents strictly enforce these. But inside the cadre, French parents entrust their kids with quite a lot of freedom and autonomy.

Wow!  This is almost like rocket science or something! Maybe the French really are better than we are! Wait, there's more.

Authority is one of the most impressive parts of French parenting -- and perhaps the toughest one to master. Many French parents I meet have an easy, calm authority with their children that I can only envy.

Ah, there’s the rub: authority. For a large segment of American parents, authority is anathema: associated with mental rigidity and the exertion of illegitimate power and control. Why this distorted view? Thank our twelve to eighteen year public liberal emersion education system. Those who fall sway to this indoctrination program emerge as liberal adults fully invested in liberalism’s first principles: equality, fairness and non-judgmentalism.

Liberal parents attempt to raise their offspring according to these guiding principles. (Unlike their conservative peers who managed to escape with their critical thinking skills intact and raise their kids, well, more like the French.) For liberals, the highest moral standard is fairness and there is no sin greater than being judgmental.

As parents they find themselves in constant conflict with their key values. Exercising parental authority to exert control over their child requires inequality of treatment on occasion and near constant judmentalism. No wonder liberal parents are always stressed. And no wonder the author envies the French who, au contraire, are genetically judgmental and have no problem whatsoever with authority.

Their kids actually listen to them. French children aren't constantly dashing off, talking back, or engaging in prolonged negotiations.

So what exactly is it about French parenting that is superior? This is what I gather: they are not uncomfortable treating their children like untrained puppies until such time as the children have learned to stop peeing in the house. Which is to say: French parents assume the role of alpha dog with their children rather than the other way around.

Seriously, how hard is this? If you feel you need coaching but can’t afford to live in France for a year, get in touch with one of your conservative friends with kids and spend a few weekends observing them.

Posted by DEWEY FROM DETROIT at 6:45 PM