Janeane, isn’t that sort of uh…racist?

Garofalo also said successful businessman Herman Cain is either being paid to run or is suffering from Stockholm syndrome because he is a "person of color" running as a Republican in the party's presidential primary.

"But, Herman Cain, I feel like, is being paid by somebody to be involved and to run for president so that you go like 'I love that, that can't be racist. He's a black guy, a black guy asking for Obama being impeached.' Or 'it's a black guy whose anti-Muslim. It's a black guy who is a Tea Party guy.'"

I dunno, isn’t it a little, uh… racist to assume that a “person of color” is unable to think for himself, Janeane? Especially a very successful one with a BA in mathematics and a MS in computer science? Or do you just think that all “persons of color” need to be told how to “think right” (think “right” - that’s just a figure of speech, don’t get your bundies grundled) because they are completely unable to grasp the complexity of your progressive world?

But then, maybe it takes a comedian and provocateur  educated in History and American Studies (what exactly does “studies” include, I wonder?) to recognize a victim of Stockholm syndrome.

And as I’ve mentioned before, Jannie, nice tats: 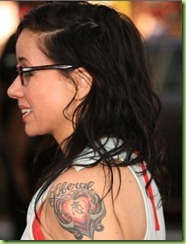 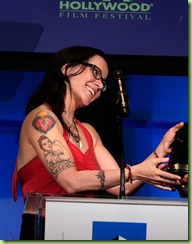 For the record though – just my uneducated opinion - I don’t think you got your money’s worth from the cosmetic surgeon. Looks a little, eh…stretchy around the mouth. But with your style sense, I don’t think you really have to worry about it.

And that ends my lesson in “American Studies” for the day.

Update: Video from Anonymous Commenter. Thanks!

Ask yourself: would your dog pee on your leg? I guess if your dog owns you, it does help explain that whole “angry woman” thing. 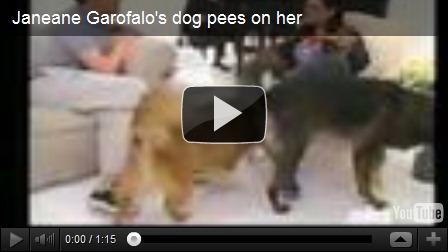 Posted by DEWEY FROM DETROIT at 1:19 PM