The Motor City: Broken and Out of Warranty 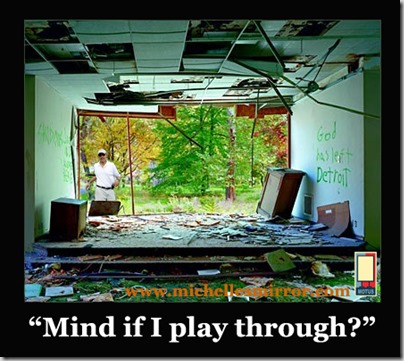 “The city of Detroit filed the largest municipal bankruptcy case in U.S. history Thursday afternoon, culminating a decades-long slide that transformed the nation’s iconic industrial town into a model of urban decline crippled by population loss, a dwindling tax base and financial problems.”

In short order there will be allegations of racist-fueled white flight and business abandonment of the city. Charges of unfair treatment will be leveled against “the system” that  led to the Motor City’s devolution. This will be followed immediately by demands of restitution payable in the form of a massive federal bail out.

What sort of malignant, greedy, hateful racists would not only allow this once magnificent city to self-immolate but actively participate in its demise through racist acts of willful negligence and outright theft?

The usual  kind, our leaders: Coleman A. Young, Kwame Kilpatrick 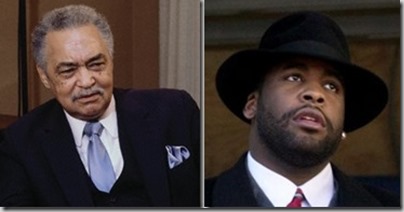 Two of the racists who raped and pillaged their own city

Here is the entire Detroit mayoral lineage from 1974 to the present:

Five black men have run Detroit for nearly 40 years. Although Archer, Cockerel and Bing are all decent enough men, none of them - for no doubt complicated reasons – could turn the legacy of their predecessors’ graft, corruption, cronyism, and bloated union contracts around.

Never-the-less, the race mongers will be on scene shortly to file charges against a “system” rife with racial animus for causing the collapse of Detroit. Let the record reflect that Detroit, which has been grappling with an explosive crime rate for decades, has also had a black police chief for decades; that the city where the infamous “Devil’s Night fires” were invented has a black Fire Commissioner. Note too that Detroit, led by a black mayor and black city counsel for 40 years also has one of the most abysmal public school systems in the country. In Detroit fewer than 25% of its students graduate high school, and many who do are still functionally illiterate. Of those managing to graduate from the Detroit school system with aspirations of higher education, only 2.3% of them are deemed to be “college ready” based on  their ACT scores. The school system too has been led by a black Superintendent and a black Board of Education, for decades.

So when Jesse and Al and no doubt President Obama himself show up in Detroit to protest and demand equality and “social justice” from “the system” that has held the black man down for hundreds of years, let the record reflect the following: Detroit is a city comprised of 90% black citizens. They consistently elect almost exclusively blacks to run the the city government and fill the school board seats. Blacks have run the city’s fiscal affairs for 40 years, they have staffed and provided city services for nearly as long. In Detroit – a city of blacks for blacks and by blacks - blacks have not just been part of “the system” they are the system.

So I agree with Eric Holder when he said:

“…in things racial we have always been and continue to be, in too many ways, essentially a nation of cowards."

If we are to address the real issues that caused the implosion of a once great American city, we are going to have to discuss race because it is not just a card in somebody’s hand, it is the entire fixed deck. Let’s have an honest discussion regarding the flagrant use of racial pandering, victimization and exploitation for personal and political gain. Let’s talk about why the city’s civic jewels were bequeathed to the city’s black population; and let’s examine why they have been so devalued ever since. Let’s discuss how a city exclusively run by democrats and blacks has spent the better part of half a century circling the drain.

Let’s honestly discuss who and what is “holding the black man down” in Detroit because, brother, it most assuredly isn’t white America any more.

This is Dewey; reminding you that if Obama had a city, it would look like Detroit. 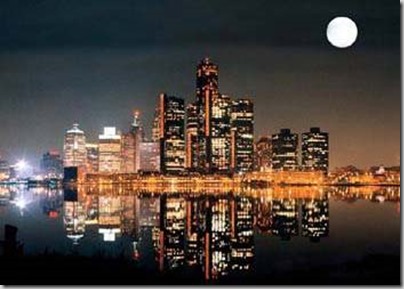 Moon over Detroit: waxing or waning?

But you probably don’t think it could happen “here” do you? Neither did the citizens of Detroit, 50 years ago.

As Young’s pack of leaches grew fat and very, very wealthy, the people and the city coffers grew poorer and poorer. Both businesses and middle class residents – black and white – fled the city to escape crime, crappy schools and high taxes. And the city grew more and more segregated as only poor blacks stayed put: racial politics tend to do that.

A Short History of Detroit

The Democratic regime that has governed Detroit for decades squelches all critics through one of two ploys: leveling the irrefutable charge of racism, or if that’s inappropriate, demanding that additional funding is needed e.g., schools: because God knows, $11,600 per student isn’t enough (private schools charge $6,600, and I doubt many would pay that if their dropout rate was 75%). The death-spiral of liberalism has annihilated Detroit.

So, Mr. President, Who Do You Think Destroyed Detroit?

Let’s use Detroit as our test case, since it has had its share of wealthy individuals, corporations and special interest groups over time. And it once had a prosperous middle-class, although that socio-economic demographic has all but disappeared from inside the city borders. So it presents the perfect Petri dish of cultures for this experiment.

Let’s see if we can ascertain who ruined Detroit, and is therefore responsible for the demise of the middle-class.

In return for relocating in Detroit – and planning to build something, somewhere, some time - they’ll get a 12 year tax credit of around $29 million granted by the MEDC. They’ll also get an $18 million tax credit granted by the Michigan Economic Growth Authority to help them complete their current relocation project. In addition the City of Detroit will throw in parking concessions and additional tax abatements.

Live and Die in Detroit:

When Marabel moved into the house on Robinwood Avenue in 1964 it was a beautiful neighborhood of 1920’s era brick bungalows, stately trees and neat gardens. The northwest Detroit neighborhood was adjacent to the exclusive Palmer Park Golf Course and Country Club. A serene, safe and attractive community. Forty five years later, it had turned into a dump.

Possibly there’s an element of schadenfreud attached to Detroit’s decline that both enthralls and repulses people. In the course of less than 50 years  –a blink in the history of a city - it plunged from the pinnacle of urban industrial prosperity to the depths of urban industrial decay: completely, indisputably, very likely irreversibly.

Detroit, Back to its Roots:

There is something innate in human nature that draws our gaze to an impending train wreck, and maintains our slack-jawed attention as we gape at its aftermath. It’s like that with Detroit, which has been voted the worst train wreck in the “major American city” category. Journalists, artists and bloggers from across the world come to look at, photograph, write about and paint us. Then they go home to wring their hands and weep over our detritus.

You Can’t Handle the Solution!

To avoid charges of racism there were only a few proscribed approaches for discussing the city’s problems:  you were allowed to wring your hands helplessly, you were allowed to mourn the demise of the city as long as you acknowledged that its fate was the result of white flight and governmental neglect, or you could pull a Pollyanna and proclaim that Detroit was simply in hibernation waiting to rise from the ashes. But under no circumstances were you allowed to speak the unspeakable truth: that for over 30 years Detroit has been governed by Black leadership - with the complete complicity of the Democratic Party – and that each year the city had grown worse.

Detroit Schools: Where We Eat Our Young:

If you can read this, thank your parents for not sending you to a Detroit public school.

It feels like a nerve unsheathed, it looks like a malignant menace. It is the face of a city waiting for salvation, it’s worthiness unclear.

Detroiters escalated the time honored traditions of trick-or-treat vandalism - home egging and mailbox assaults – to arson in the ‘70s. Over the next decade, financially troubled business’ and others with good insurance policies joined in the Devil’s Night fun for profit.

Posted by DEWEY FROM DETROIT at 12:13 PM