Political Theatre and the Fluke Files

Is there anyone who hasn’t heard Sandra Fluke’s soulful pseudo-Congressional testimony on the need for universities to provide women stew-dents with “free” contraceptives?

If I understand her argument correctly as to why someone else should foot the bill , it’s because contraceptive rights are part of a larger body of “women’s rights” related to “reproductive rights.”

I must admit, I don’t know what “reproductive rights” are; if it weren’t  for the specific reference to contraceptives I would have guessed it was a new, neutralized term for abortion. But no; although related to the body of abortion rights and women’s rights to “decide” this appears to be a newly identified “right.” One that nobody is really arguing with other than it being defined as a  “right” that somehow requires someone else to pay for. Ironically –at least in the context of the abortion debate - this “right” is perceived by the rest of the sentient world as a free “choice” not a right. But we find ourselves immersed in these straw men controversies precisely because words no longer mean anything in the political milieu.

Straw men are critical players when you need a good controversy to whip your base into outrage and frenzy. And nothing gets the boots on the ground to show up at the box office like a good controversy in the theater of the absurd. Church vs. Women’s Rights vs State: that’s a formula for guaranteed heavy turnout.

The demand for new hits in the Left’s political theatre is precisely why we’ve seen the sudden demand for religious organizations to recognize and fund this new  “fundamental right.” It’s also why we were entertained by the Fluke/Pelosi  circus performance.

Let’s  review the situation:  Ms. Fluke is a 3rd year law student at Georgetown, attending on a Public Interest scholarship (i.e. she wants to be just like Barack Hussein Obama when she grows up, which technically, at age 31, she has). She advertises herself as a “reproductive rights activist.” Where, one wonders, does a person find employment in that productive - no pun intended - field?  And what, pray-tell, does a reproductive rights activist activate?

Fluke also notes that she is past president of Law School Reproductive Justice (LSRJ). I don’t know if it’s just me, but when I hear the word “justice’ thrown out by the Left in any context I reflexively reach for my wallet, as in true postmodern fashion they’ve redefined justice to mean redistribution.

Seriously, I don’t know how anyone other than a political hack like Nancy Pelosi and the rest of her ragtag Democrat Steering and Policy Committee  could listen to Fluke’s “testimony” and  not laugh out loud: it defines the overused word “ludicrous.” In fact, I don’t know how anyone could watch and not want to slap this smug, self-righteous collectivist across the face.  She is an embarrassment to her sex.

Okay, I get it; coeds have a lot more sex now than they did even back in the good old days of  the sexual revolution. And I also get that they don’t want to be “punished” with a baby. But here’s the inconvenient truth for the Democrats: abortion seems to be losing some of it’s Facebook friends. While it was once – at least in feminist camps – the go-to solution for a pregnant young coed who wasn’t ready to be a mother, it has become less appealing over time. Apparently the now readily available early term ultrasounds that clearly show developing life in the womb are giving some women pause. It’s always harder to make moral decisions when reality intrudes with facts.

So while I’m still at a loss as to what reproductive justice is, I am certain of its political intent: the establishment of a new secular sacrament around which the Left can rally the brethren. While people may argue how best to interpret the results of the most recent Gallup Poll on abortion, it will be hard to argue that it doesn’t indicate a shift away from the enthusiastic embrace of abortion that it has enjoyed over recent decades. In short, abortion is no longer the annuity payout at the polling booth that it once was, and the Left is scrambling to find it’s sequel.

Enter “reproductive rights” and say “hello” to contraception – the new answer to women’s rights campaign issues. First introduced to the debate, literally, by Democratic Party hack and MSM mouthpiece George Stephanopoulos. Brilliant! While everyone was blowing off contraception as a dumb question for a presidential debate, the Libs were busy prepping Sandra Fluke for her debut “testimony” on the political stage and Obama was busy mandating contraceptive coverage for ALL women by their employer, regardless of conscientious objector status .

So, forgive me, but Sandra Fluke is not a fluke. She’s part of the Left’s new strategy. Frankly I’m shocked by the outpouring of support and agreement with this stupid new strategy, and even more shocked by the defense of Fluke and her harebrained argument for this being a basic human right warranting government funding.

Proving once again that you should never underestimate the moronic depths that the Left will plumb in search of the moronic response it seeks to elicit from it’s moronic base.

The Left’s political theatre of the absurd  will continue. To combat it, just remember to ask yourself:

What Would Brietbart Do? 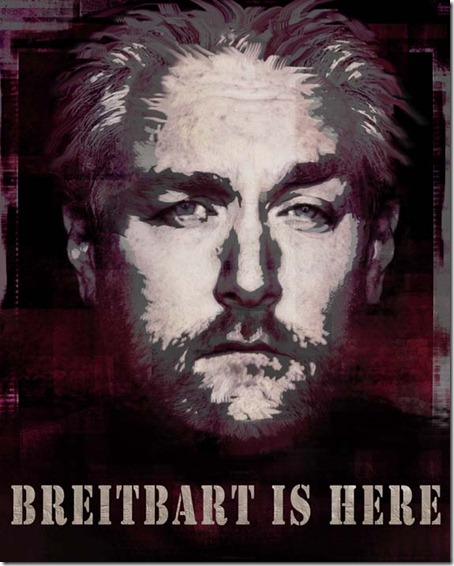 IMPORTANT CLOSING NOTE: BigFurHat, of iOwnTheWorld, created this graphic along with several others. He has negotiated a deal with the owner of Anthem Studios (a personal friend of Breitbart) to produce and sell “Breitbart Is Here” t-shirts and bumper stickers, with all profits going to the Breitbart family.

BigFurHat has offered to send you a free high resolution jpg of this graphic (for personal, non-commercial use only) if you email him at bigfurhat.mail@gmail.com. Go here to see BigFurHat’s collection and then go here to buy a “Breitbart Is Here” t-shirt.  I put a link to the “BIH” store in my side bar over there on the RIGHT. Use it to help Breitbart continue to take care of his family. If you’re a blogger, you can help by snagging a copy of the “BIH” graphic and link and posting it on your blog.

NOTE: posted by She-Dewey, so enough with the misogynist allegations.