This might explain something about the “Education Bubble” too.

Although you really need go no further than #5: Spending by the Department of Education has skyrocketed with absolutely no effect on test scores. 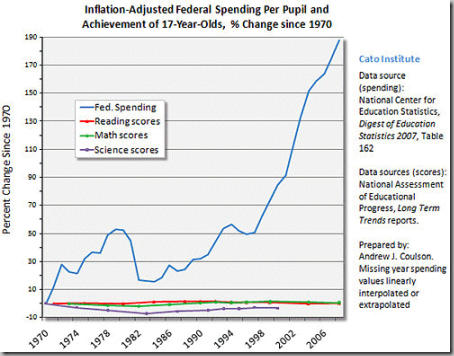 Not quite an inverse relationship, but certainly not a positive correlation: makes you wonder doesn’t it?

Go see why Doug urges you to to support the eradication of this useless, unconstitutional appendage of the teachers' unions.

And for the record, this is but one of many government behemoths that exist primarily to throw their weight around via rules and regulations that make it more difficult to do whatever it is they were originally conceived to expedite. Such is the lot of bureaucracies.

Posted by DEWEY FROM DETROIT at 10:57 PM