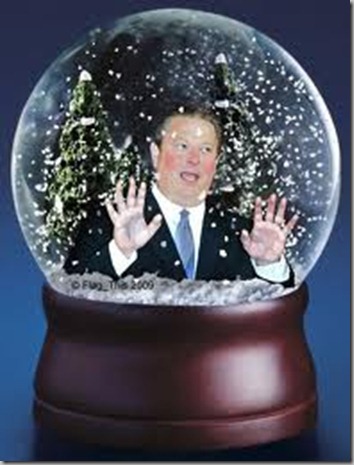 Note to Al Gore: It’s not nice to fool Mother Nature. Perhaps that’s why she’s spent the last 3 years turning you into a punch line.

In a delicious case of cosmic kismet the “Al Gore Effect” – the manifestation of record cold temperatures whenever and wherever global warmists convene – occurred again at this year’s United Nations Framework Convention on Climate Change  in Cancun. This “unexpected” and “unprecedented”  turn of events would prove embarrassing were it not for the mental dexterity and flexibility of global-warmist spin meisters. Their explanation will be cut of whole cloth, fabricated entirely of artifice. They have deemed the record cold and snow to be the result of record warming elsewhere on the planet. Or something.

The death of the exchange was due to lack of interest: no one wanted eco-brownie points badly enough to pony up actual money to purchase them. What a blow that was to Al’s dreams of cooling the overheated planet. Not to mention his dreams of incredible wealth. (Oh but wait: St. Al gives all his money away. Right?)

Al will probably be holed up in his beachfront home for awhile, waiting for the oceans to rise and the embarrassing spell of colder than normal weather to pass. This should give all the other propagandists time to roll out the current make-it-up-as-you-go-along scientific explanations for this anomaly.  These explanations are geared to assuage any concerns of  true believers when confronted by seemingly counterintuitive data. The agitprop must sound plausible, but it doesn’t matter how improbable it is: the cult is inclined to believe.  Cognitive dissonance makes them so uncomfortable. So the current explanation is that “cold and snow today is due to excess moisture caused by extraordinary heat (?!) in sub-tropic Africa yesterday.” And it helps, especially if you’re explaining this to a doubting Thomas, to throw in “you f***ing idiot!” or “why can’t you Neanderthals seem to grasp this simple concept!” Or at least I presume these are persuasive  arguments because I see them so often on lefty blogs trying to explain the phenomenon.

The propagandists  job is to keep the the dream of a dying planet alive, in order to convince everyone else to reduce their carbon footprint. A climate crisis allows them to pursue their dream, driven by financial or ideological motivation -or both, to spread the wealth around. The dream of a One World Order is alive and well, and doubt it at your own peril. It’s still premised on the “we’ve got more than our share” Marxist belief system, and it still demands that the  industrialized west needs to subsidize the development of the non-industrial third world. A carbon tax on developed nations would accomplish that quite effectively: a willing surrender of wealth and resources in order to make the world more “fair.” After all, the wealth and resources  of western countries were by and large ill-gotten to begin with, so reparations are in order.

Thank goodness, some sovereign countries are finally beginning to come to their senses.

But why must it always be a zero sum game with these people?  Allow me to answer that: for the ideologues, that’s just a basic tenet of of their belief system: you don’t create wealth; in order for you to have more, someone else must have less. For those just in it for the money, they don’t believe it at all, but their well being and wealth accumulation depends on you believing it.

So you see, once the believers reject the dogma of the Church of Global Warming, 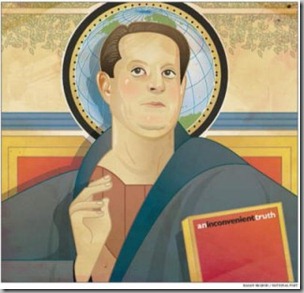 the gig is up for those with high stakes in the game.  The fact that Mother Nature herself is conspiring to defrock these charlatans is the textbook definition of irony.

Besides, wouldn’t we furless creatures need to use a whole lot less carbon based fuel if it wasn’t so damn cold all winter?  I say, bring it.

Posted by DEWEY FROM DETROIT at 5:32 PM