An Immodest Proposal: Snatching Capitalism from the Jaws of Socialism 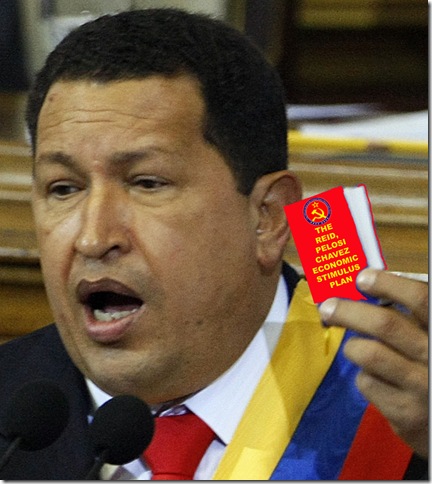 Our duly elected representatives have seen fit to pass a spending bill of $1 trillion without so much as the pretense of having read it. This is in addition to the authorization of a $700 billion Troubled Asset Recovery Program or TARP, which – as it turned out – contained no A, no R and no P: just plenty of T). TARP was established to bail out banks, financial institutions and, as it turns out, automotive companies. General Motors and Chrysler now indicate they will need another $35 billion within the next few months in order to stay afloat. And we aren’t done. The Obama administration said last week we may need another huge “stimulus” package as early as this summer.

Also swirling around Washington are rumors regarding the “temporary” nationalization of banks. The United States is fast tracking its way from a capitalist free market system to European Socialism.

I realize some of you are not alarmed by this phenomenon. If that’s the case, please move to Sweden or Venezuela. Or if you’re just confused about the differences between the two systems, the Cliff Notes summary below may be helpful. If you’re still undecided after reading the summary, well, there’s always Canada. For the rest of you, please advance to “An Immodest Proposal” to put the capital back into Capitalism.

Under a Capitalist Democracy, economic decisions essentially reside in the hands of a free market, i.e. private control. Individuals and entities are free to acquire, hold and dispose of property: they can invest capital in order to produce a product or service (e.g. build cars, computers or toys) or to acquire skills such as a medical or law degree in order to practice medicine or law, or to buy products for resale (retail). The “invisible hand” of supply and demand guides the allocation of resources into products and services. People are incented by the profit motive to develop skills in order to provide a product or service to the public or an employer.

With a Socialist Democracy, not so much. Instead of being guided by the “invisible hand”, the all too visible governmental fist guides the economy. The state, not the market is the primary source of economic decisions and control through central administration and/or planning. While socialist economies that stop short of Marxism might not exert ironclad control over the market, there is such a high degree of market manipulation and interference that the free market is inoperable. One could argue that the Community Reinvestment Act passed by Congress in 1977 that required banks to provide mortgages to low income, i.e. unqualified, borrowers is an example of this type of market interference. “Sub-prime” loans, initially bundled and sold off through Fannie Mae and Freddie Mac – quasi-governmental financial institutions –soon spread irresponsible lending throughout the entire banking system creating artificial demand and ultimately the housing bubble.

With socialism the allocation of scarce resources and services is determined by state policy, e.g. health care: pray to the deity of your choice that you don’t need open heart surgery anytime soon. Likewise the state can deny citizens the right to acquire, hold and dispose of property (closer to home we have the Kelo decision, already heading us in that direction.)

Despite anything else you might think of this system, it is a demonstrated incentive killer (why should I work if I can’t keep a reasonable share of my profits?) and categorically less efficient than a free market.

and achievement. Motivation to achieve and produce things of value is a good thing. Profits that allow a business to employ thousands of people are a good thing; if you don’t think so ask a laid-off GM, Ford or Chrysler employee. Free market economics aided and abetted the creation of Microsoft, Apple and Google. You might think the world would be a better place without Microsoft and iPhones, but life without Google Earth? Come on! Reason enough to resist the march to the abyss of European socialism. In order to reverse some of the harm done by Congress’ recent pork products stimulus bill, and in the interest of re-capitalizing capitalism please consider:

Each bank, financial institution, automotive company, or any other corporate entity that has accepted government funds, as well as any state or local government entity that has accepted funds in the form of programs, handouts, or “stimulus” initiatives (hereafter referred to as pork products) will be required to fund these loans or programs in the same fashion that they would have prior to the “drying up” of the credit markets. That is, corporations will be required to issue a special class of callable corporate bonds, state and local governments will be required to issue special interest callable bonds at an interest rate commensurate with their financial health and maturity dates. Interest payments may be deferred until such time as the bonds mature, but bonds may be redeemed early by the borrowing entities at prorated rates.

The entities have been spared the hassle and expense of selling these high-risk instruments, as the government has done that for them by borrowing on the full faith and credit of we the people. However, these corporate and governmental entities shall be required to issue bonds that shall be held in a “Stimulus Taxpayer Debt” mutual fund (STD-MF). Shares in this STD-MF shall be distributed to each taxpayer based of the total amount of individual income taxes they have paid over a 5-year average period commencing in 2008 and culminating in 2012. This 5 year average tax payment will be used to determine the individual’s share of the aggregate individual income tax bill. Shares of the STD-MF will be issued based on this proportionate share. Said shares will be actual shares of the STD-MF, and will be available for trade after an initial 5 year holding period at which point taxpayer-holders will be allowed to sell, trade or hold till maturity. At maturity they are free to cash out or roll the shares over into a new mutual fund established with the proceeds of the fund (assuming some of these corporations and government entities will pay back their debt with the interest determined by their bond agreements.) The new mutual fund will be established and used for supplemental funding of Social Security and Medicare. Original shareholders will be free to pass these shares on to their heirs free of estate tax, as said heirs are going to continue to pay taxes for this folly for generations to come.

Because the last thing we need is another governmental bureaucracy, the administration of the STD-MF will be required to be privatized and funded by a portion of the interest and fees paid by corporate and governmental agencies benefiting from the taxpayers funding of their pork products. Since there is a surfeit of qualified bond managers and administers on the market now, staffing should not be an issue.

A stimulus a capitalist can believe in.