Justin A. Frank M.D. is an author who practices and teaches psychoanalysis in Washington D. C. 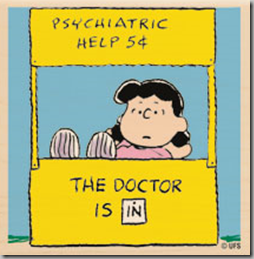 As of late, his specialty has been psychoanalyzing people he doesn’t exactly know, and who aren’t exactly his patients. Since that is a clear violation of the American Psychiatry Association’s  code of ethics which states "it is unethical for a psychiatrist to offer a professional opinion unless he or she has conducted an examination and has been granted proper authorization for such a statement" you might think that would be a problem for Dr. Frank. And it would, I suppose, were he currently a member of the APA, which he’s not.

He is the author of Bush on the Couch in which he renders his astute, professional opinion regarding the psyche of George W. Bush. His conclusions:  Bush suffers from megalomania, is probably incapable of true compassion, shows signs of sadism, and - as an untreated alcoholic - is in constant danger of a relapse. Further, in Frank's opinion, GWB manifests the symptoms of a "dry drunk," principally irritability, judgmentalism and a rigid, inflexible world view. Whew! Pretty thorough. I’m sure his research is too. Because he’s an author, and a professor.

He has also recently released a new book: Obama on the Couch.  Unlike Bush, Frank finds Obama to be in “excellent mental health”, with “a few blind spots” due primarily to his fractured upbringing that has left him with a need to achieve consensus. Although he does concede that those “blindspots” could be dangerous to Obama’s  presidency, there is no discussion of megalomania, lack of compassion, sadism, alcoholism, irritability or judgementalism causing a rigid inflexible world view. So he’s got that going for him.

On the differences between his two non-patients, Frank concludes:

"One thinks only in terms of either/or – that’s Bush: You’re with us or against us. Obama has the ability to stop and think and not immediately characterize people into good or bad. Writing a book about Obama was much more of a challenge in one way because I really like and admire him. Bush I really was frightened of, because I came to feel that he was not competent to be president."

Oh, and one last thing: Bush has trouble with abstract, flexible thinking, whereas Obama is…what’s the word I’m looking for? Oh yes – a genius.

With that by way of background, let’s see what the  psychoanalysis-for-dummies Doc has to say about the psyches of the Republican rank and file in his article “Why the GOP Won’t Embrace Mitt Romney.” For purposes of simplification, he has thrown everyone with an R after their name into two buckets of  group-thinkers: the Tea Partiers and the rest of the just-normally-stupid Republicans. I find his insight illuminating, albeit more so of the liberal mind than the conservative one. I believe that’s called “projection” in Dr. Frank’s field.

In fact, as they struggle to settle on a leader by indulging in serial infatuation with a variety of unelectable alternatives to the front-runner,

Democrats used to call this “vetting” and up until the 2008 campaign actually did it for their own candidates. At that point in time they stopped vetting their own and began performing this service exclusively for candidates for the opposition. It might have been better for everyone had they focused more on their own team. Instead, they skipped the vetting process in lieu of a popularity contest that eventually boiled down to a consensus on the “clean articulate, light-skinned Negro.” Just for fun though, Mondo Frazier completed the vetting process for them and published the results in The Secret Life of Barack Hussein Obama. Odd, though, that no one had time to do it back in  2008 when Obama was still bright and shiny, and in need of a prodding or two.

the Republicans are revealing a fundamental fact about a large and controlling segment of the party: they can only tolerate leaders who are simpler than Mitt Romney seems to be.

Remember, like Bush, all R-words seem to have trouble handling complexity. But to Dr. Frank, some appear stupider than others:

The “anybody-but-Mitt” attraction to simpler alternatives is just the latest expression of a concept known as the attraction to non-thought, an unconscious defense first identified by British psychoanalyst Gianna Williams.

Actually, “non-thought” was a term used previously by Robert Jay Lifton in his 1961 book “Thought Reform and the Psychology of Totalism” in which he wrote:

“The language of the totalist environment is characterized by the thought-terminating cliche. The most far-reaching and complex of human problems are compressed into brief, highly reductive, definitive-sounding phrases, easily memorized and easily expressed. These become the start and finish of any ideological analysis. In[Chinese Communist] thought reform, for instance, the phrase "bourgeois mentality" is used to encompass and critically dismiss ordinarily troublesome concerns like the quest for individual expression, the exploration of alternative ideas, and the search of perspective and balance ... (loaded language is) the "language of non-thought."

He is, of course, talking about brainwashing. One might argue that the lemming march to Barack Hussein Obama’s coronation more closely resembles brain-washing than does the Republicans’ reluctance to accept as their candidate a man many fear is wobbly on his commitment to conservative values. Or I suppose it could just be Republicans’ “attraction to non-thought.” I don’t know, I’m not a psychiatrist.

The appeal of the phenomenon is simple: why make the effort to entertain notions of complexity when to do so invites the risk of psychic chaos that uncertainty can produce?

Now,  I’m not a psychiatrist – did I mention that? - but that sure sounds  like a case of  liberal projection as it seems to likewise describe the phenomenon of Obama’s mercurial rise through the ranks of the Democratic party back in 2006-08. Despite reports of his great big brain, can you get much simpler than HOPE and CHANGE? Apparently. YES WE CAN!

Unless of course Dr. Frank actually buys the story of Obama’s complexity and superior-to-all-mere-mortals intellect. In that case, it may be the doc who’s brainwashed and is therefore  unaware that under that glossy veneer, Obama – alleged savior and messiah - is nothing more than a drug store cowboy.

“Now the attraction to non-thought is exacerbated by our collective insecurity in response to the shakiness of our economy. In practice, this defense, motivated by a denial of the messiness of reality, extends to a hatred directed against anyone who tries to challenge that denial.”

Excuse me;  but are we still speaking about Republicans? Because that theory could certainly explain the visceral, spittle inducing vitriol of the Left directed, serially, at Bush, Sarah Palin, the entire Tea Party, Michelle Bachman, Rick Perry and Herman Cain. But again, I’m not a psychiatrist.

“Though Obama is the primary target of that hatred, expressed in the automatic rejection of every proposal he makes,”

That phenomenon sounds familiar; what is it that it reminds me of…oh yes! Bush-derangement syndrome.

The Republican resistance to Romney is rooted in this same mindset, expressed as a desperate need to find a leader who is simple, certain, and who will never change his mind.

Yep. Simpletons-‘R- Us. It’s actually even simpler than that. Republicans are simply looking for someone who believes in the supremacy of the Constitution and won’t change his mind about upholding its principles once elected.  I will concede to the part about it being a desperate need.

Like Obama, Romney is perceived as Other — wealthy, northern and Mormon, which arouses deep distrust bordering on hatred among Tea Party voters.

Really? Because I had no idea that Obama was wealthy, northern or Mormon. And for the record, what the “Tea Party voters” really hate are candidates who would be comfortable replacing the Constitution’s “simplicity” with an ideological “complexity” that the founding fathers never intended.

Compared to his Republican rivals, whose rhetoric can rarely be confused with sophisticated thought based on a command of history or the facts,

Nice way to work in the innuendo again that Palin is a moron, Bachman is a moron, Perry is a moron and that non-liberal black guy – you know, the serial sexual harasser – is an “imbecile.”  The field really couldn’t get much more unsophisticated than that, could it? You do have to wonder how they’d all do, though, if they got themselves a good teleprompter to process all their thoughts.

he comes off as a thinker and as different as the exotic Obama.

Exotic isn’t the problem here.  For one thing, I doubt Tea Party advocates would find a “wealthy, northern, Mormon” to be exotic, especially if he believed in lower taxes, limited government and fiscal control. “Exotic” in an American political context is a term that is best reserved for a our soulless, naked Marxist President who claims to be an American but acts more like a citizen of the world; and I don’t mean that in a good way.

We won’t hear Romney revealing an ignorance of history to rival either Michele Bachmann’s or Sarah Palin’s.

…because, being a wealthy northern guy, he’s far more so-phis-ti-cated than any of those middleclass gals from fly-over country, the hick from Texas and the self-made non-liberal black guy from the south.

And though (Romney) is clearly comfortable reversing or denying past political positions for the sake of political expedience, and pandering to the either/or outlooks of the Tea faction of the party,

For the Left,  who value pragmatism and consensus above all else, being able to switch positions on a dime and pander is considered a distinct advantage.  That’s why they’re known as the party of pragmatic pandering, and the Republicans are known as the Party of “no.”

he is not afraid of presenting himself as capable of both/and thought processes.

Because Frank believes that “both/and” is the expression of an expansive mind that can grasp complexities that the little judgmental minds of “either/or” thinking cannot. The “both/and” sensibility offers the promise of a wonderful “have your cake and eat it too,” world; unlike the dull, limiting world of “either/or” where you have to live within your means and sometimes choose between bread and circuses.

So it would seem that Dr. Justin Frank has inadvertently explained why Republicans are not excited about Romney - and Democrats are! Regardless of what Romney says, many Republicans remain suspect of his commitment to the critical principles of conservatives. And so do the Democrats!

That’s the reason the Democrats are so interested in “helping” the Republicans pick the right candidate to run against. They don’t want to admit it, but they know it’s possible that the unthinkable could happen; the smartest man ever to be elected president could lose his reelection bid due to this lousy economy that Bush saddled him with.

In that event, they surely don’t want to be stuck with the winner being an “either/or” president committed to lower taxes, spending cuts and less government. They would be much more comfortable with a wealthy northerner sophisticated enough to grasp the value of a “both/and” proposition.

Someone more like Romney who’s nuanced (i.e. will vacillate as necessary) enough for their elite sensibilities. That pesky “Mormon” issue  may give them pause, but they’ll just have to hold their noses in the privacy of the voting booth and pull the “R” lever anyway.

Posted by DEWEY FROM DETROIT at 1:49 PM